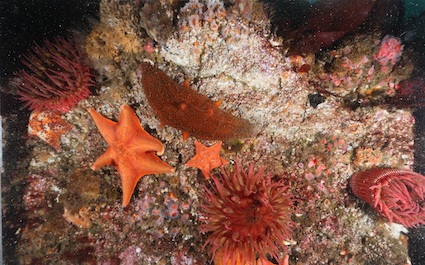 We use an SLR with a wide-angle lens mounted on a rigid-frame quadrapod to image shallow benthic and kelp forest communities at reef sites spanning the Southern California Bight — including several Channel Islands National Park monitoring sites — as well as seven offshore oil platforms.

Elizabeth Clarke, head of the AUV program at NOAA NMFS NWFSC in Seattle WA, has provided us with deep water imagery data collected with a SeaBED class autonomous underwater vehicle (AUV), which has surveyed the benthos in the Southern California Bight region. The SeaBED AUV is a hover-capable robotic vehicle that is able to work as close as 2m off the seafloor while maintaining precise altitude and navigation control. Its 2,000m depth rating makes it an ideal tool for conducting surveys of reef, shelf and deep slope habitats. Its small footprint allows it to be operated from platforms ranging from global class oceanographic research ships to small vessels of opportunity. The SeaBed AUV can carry a wide variety of optical, acoustic, and oceanographic sensors for non-extractive surveys of the benthic communities in habitats that are too deep for divers and surface acoustics and too rugose for towed camera sleds and traditional bottom trawling.

Imagery is very useful for underwater exploration and measurements, and is essential for recording biodiversity from autonomous vehicles. However, most imagery is presently analyzed manually, which is time-consuming and expensive. We are developing image analysis techniques targeted at underwater image classification on the operational level. Our main interest is in finding techniques that can be trained automatically based only on provided training data, and thus can be deployed automatically in our cloud-based image analysis and annotations system: BisQue. Such techniques must overcome the complexities inherent in the multitude of existing image feature descriptions and classifications techniques.

We began by exploring several feature aggregation techniques which allow for automated classification based on a large number of computable feature descriptors and a distributed cloud based system, and have proposed and published in peer-reviewed conferences two novel techniques:

During these studies we have used the extensive dataset of over 2000 underwater images acquired during the benthic field effort described above and manually annotated for percent coverage of sessile species in the BisQue system. Each image contains 100 annotated locations amounting to 200K data points with over 30 species. We have obtained very encouraging results on automated identification of the 11 most abundant classes (over 80% of data points) with classification accuracy of over 85%.

We further explored state of the art deep learning techniques using Convolutional Neural Networks on the same dataset and obtained comparable results. The primary advantage of these techniques is that CNN’s learn image features automatically, and operate directly on image pixels that can be efficiently accessed via the BisQue system. A disadvantage of this technique is the computational complexity that requires use of the latest GPUs.